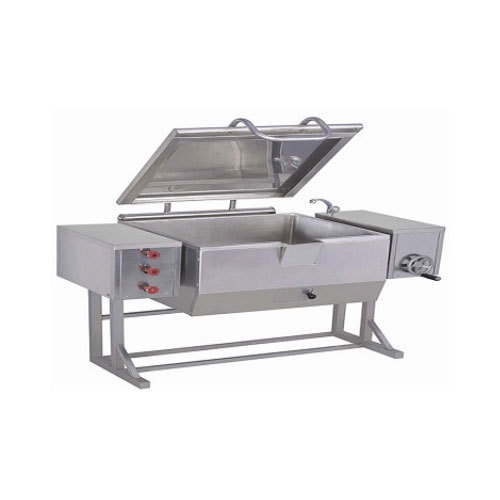 Bratt pans have deep rectangular cooking pans and pull down lids and can be heated with gas or electricity. They are very useful for cooking a variety of dishes or special dishes such as browning cubed steak with the lid open and at high temperature, followed by closing the lid, add the liquid and reducing the heat to brown. meat. This method can be used to make soups and stocks.

Bratt pan derives its name from the German word 'brat' meaning 'thosa', although in German it is actually called 'Kippentopf' meaning 'tilting pan'. The term is related to the inclination feature Bratt pans have rather than electric or handmade.

The tilting element is used for both cooking and cleaning. When cooking, the lid of the pan can be closed and the pan tilted, allowing liquid and other food items to be poured into the tilting bratt pan through a v-cut hole, ensuring there is less risk of burns or burns.

When cleaning the tilt method can be used to help clean the water around the pan. Some pans even have the added function of being able to connect to a water source so that the water can be delivered directly to the pan for cleaning or cooking.

There is also a version of the pressed Commercial tilting bratt pan pan that works similarly to conventional pressure cookers. Because the lid can be tightly fastened, water temperatures above 100 degrees Celsius can be reached so cooking times are reduced.

Commercial tilting bratt pans are often used to produce more food so they are always available in large hotels, restaurants, hospitals and universities. It is not uncommon for them to be used for home purposes as their size and nature of use are not borrowed from home cooking.

Because these are industrial or commercial equipment that is designed to last for some years. However they still need ongoing care and especially need to be cleaned daily in order to maintain proper functioning and maintain standards of health and safety.

Request A Quote In Seconds